The first time I consciously drunk Beaujolais Nouveau was in 1998. I was in Angers in the Loire region as an Erasmus student (the EU exchange program for students). A few French guys responsible for helping foreign students to integrate took us to a local bar on the 3rd Thursday of November, the day the new Beaujolais comes out. I wasn’t into wine yet at that stage, but already then I noticed the very specific candy and banana aromas that come with the “nouveau” style, the very young wines that are made with “macération carbonique” or carbonic maceration. I will leave out the technical details of how these wines are made, but the “nouveau” wines are meant to be fruit-forward, easy-to-drink and they are made to be put on the market as soon as they are ready. Ironically, the heavy marketing campaigns of the past for this style of Beaujolais cast a shadow on the rest of the wines made in Beaujolais, and very much gave the whole region a bad name. I remember I wasn’t impressed in 1998, and never picked up a bottle of Beaujolais Nouveau again.

Until today… It’s that moment again : the 3rd Thursday of the month, just 21 years later. I happened to be in Paris and entered a local wine shop. There were several Beaujolais Nouveaux on sale, and there was one that caught my attention : Le p’tit nouveau 2019 of Antony Perol, a new kid on the block according to the French press. His Beaujolais Nouveau 2018 received raving reviews in French wine magazines, Bourgogne Aujourd’hui giving it 17,5/20. In addition to that, it’s an organic wine and it contains as good as no sulfites (0,02g/l). If you could expect something different and more interesting from anyone, it would be from a wine maker like Anthony Perol, young and ambitious, and working very differently than traditional wine makers. 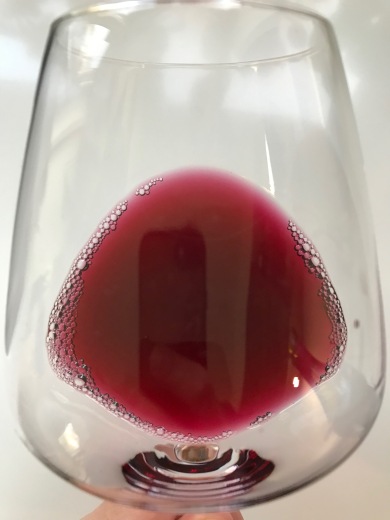 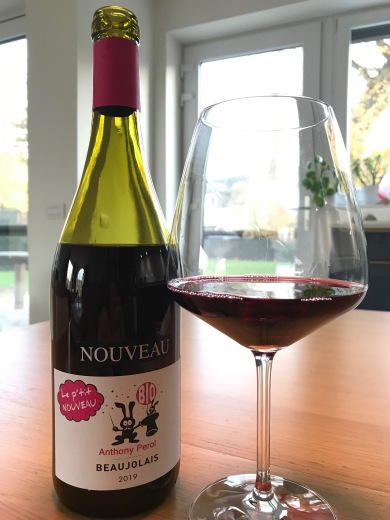 The color of the wine was amazing, it was just as purple as the capsule on the bottle! The first sniff was very disappointing : bonbon anglais, as the French say very gracefully. Pure candy, basically. This did not last, however, as the wine evolved into something more metallic, not particularly attractive either, to settle eventually in dominantly green aromas. The wine has a certain freshness, which is pleasant. Nothing too heady or sugary here, and there’s even a bit of tannin, not typical for “nouveau” wines. The herbaceousness, however, is very persistent and makes it difficult to enjoy this. Finally, there is a hint of barnyard in the finish. I can appreciate a bit of “funky” aromas as long as they are not overpowering, but when it stays on the back of your tongue, I simply cannot have it.