2015 was a vintage marked with warm weather in Burgundy resulting in wines with a lot of fruit, and good concentration. Upon release I heard some saying it was somewhere in between 2009 and 2010 in terms of style. Tasting a number of them young I found them rather ripe for my taste, preferring the 2014s, having more tension. We’re four years down the line now, so I was curious to see how the 2015s had evolved since then and if they had some of their “baby fat”. Still too early to open the more prestigious appellations, so I decided to open a few bottles that should be up for business by now.

The first wine is Dureuil-Janthial’s Rully “En Guesnes”. I visited Vincent Dureuil in 2017 and I didn’t find him at a good  moment. There had been problems in the vineyards due to bad weather and he had been up all night. As you can imagine, he was not very talkative… Luckily his wines did the talking for him. Dureuil-Janthial is especially known for his white wines, but I find him equally impressive for the pinot noirs. And La Revue des Vins de France seems to agree about the overall quality of his wines, as he was recently chosen Winemaker of the Year in France.

His basic Rully is a wine that gives enormous drinking pleasure, with plenty of ripe red fruit, and great balance. The “En Guesnes” is clearly a step up : the nose is simply enticing!

The bottle needed half an hour or so to settle down, but once it did it was enchanting, with ripe cherries, and even forest fruit. This wine definitely had meat on the bone, good concentration, and had a very smooth, velvety mouthfeel. I’m hesitant to say this, but the character of this wine actually reminded me of certain Vosnes! There was also an interesting touch of curry spice, that gave it a very individual personality. I was especially looking out for the acidity in these 2015s,  and I’m glad to say that the balance of this “En Guesnes” was just right with good acidity to counter the ripe fruit. Ripe and smooth tannins gave the backbone, and the long finish made for a great wine! No hurry to drink this, but already so enjoyable.

During the same long weekend in Burgundy I also visited Alain Gras, perhaps not such a big name as Dureuil-Janthial, but still considered to be one of the top producers in Saint-Romain. It was, however, the Auxey-Duresses Très Vieilles Vignes that drew my attention there. 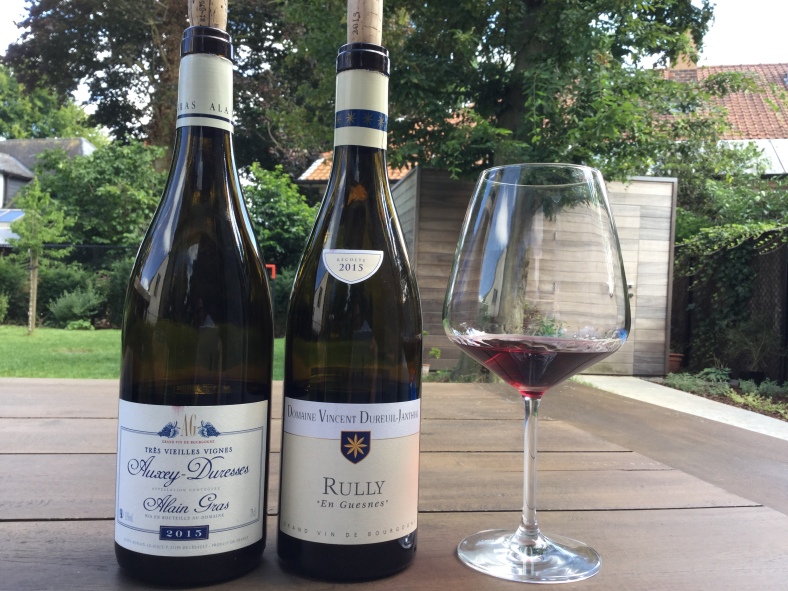 Upon opening it gave a somewhat austere impression, but half an hour later the aromas were almost literally jumping out of the glass, with ripe red fruit, noble cedar wood, and a hint of rubber. Very expressive! Again perfectly balanced, no heaviness, instead offering tremendous drinking pleasure. A very cheerful wine, more abundant than Dureuil-Janthial’s. I found it to be best after chilling it for about 20 minutes.

The last of my little red Burgundy 2015 series was the regional Burgundy of Robert Sirugue, based in Vosne. His Petits-Monts 1er Cru is still in my top 5 of red Burgundies I ever had, a very memorable wine. The regional Burgundy 2013 then again was disappointing, very meagre, so I was curious how the 2015 would turn out (unfortunately I forgot to take a picture of this one). Not chilled it was not enjoyable! Cherries on alcohol was all that came through. After half an hour in the fridge the wine gave a better impression, with also some nice ripe raspberries. This wine was considerably lighter than the other two, obviously being a wine for fast(er) consumption. As soon as the wine’s temperature went up again, the heat started coming through again. This is a bit what I feared for 2015, and as could be expected, it was the wine with the lesser pedigree that had suffered most. With the vineyards for such regional wines often being in the plains of Burgundy, where the loamy soil is very heavy, it should not come as a surprise that hot vintages leave their marks on the wines coming from here.

But all in all, I was very happy with what I found. Just as some of the initially very ripe 2009s are now beginning to show more elegance, the 2015s might evolve the same way, and already now the balance seems to be better in the 2015s than it was in the early days of the 2009s. So I think the future is looking bright!