You can never have enough champagne in the house. Seriously! I’m hooked. I’ve come a far way, though. Before I was really into wine, I used to say : “why would you buy an expensive bottle of champagne if you can have cava for 5€? What’s the difference?!” Well, that was a long time ago… With the discovery of a whole new world of wine during my sommelier training, I also came to appreciate champagne. The aromas of apple, chalk, butter, toasted bread, brioche are now aromas that I cherish every time I drink a good champagne.

During the sommelier training we did a trip to the Champagne region and visited a few producers. One of them was Dhondt-Grellet, based in Flavigny, about 15km from Epernay. The vineyards of Eric Dhondt are mainly situated in de Côte des Blancs, where the main grape variety is chardonnay. I liked the champagnes of Dhondt-Grellet from the start. They are very typical champagnes with those typical yeasty aromas and white fruit, but also the creaminess and elegance, from the entry level Cuvée Prestige to the vintage champagnes that have that extra degree of preciseness.

It was therefore with great excitement that I saw that Eric Dhondt comes every year to the Salon des Vins des Vignerons Indépendants in Lille. This is a wine fair where only members of the French organisation of independant winemakers can sell their wines. Given the fact that the wine fair of Lille is just across the border with Belgium, you can be sure that many Belgians go there to buy their wine. At domaine prices by the way! And so it went also last weekend : long queues of cars waiting to enter the parking lot even before opening time. This wine fair is a popular event, and therefore also a bit wine mayhem. But it’s fun! 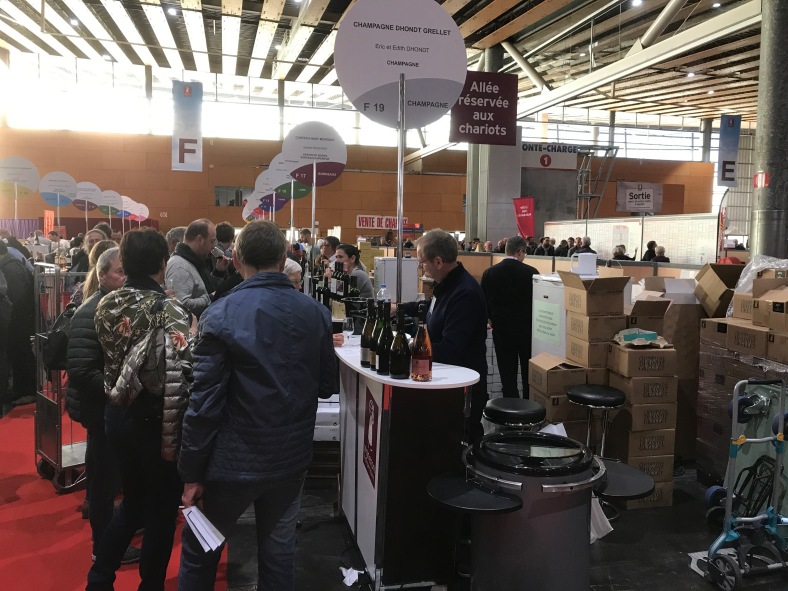 Eric Dhondt, for the last time in Lille

So there I went to find Eric Dhondt. No one there. Great! Only Eric Dhondt, being his good old timid self. Even though I had no more doubts about the quality of his champagnes I still tasted through his range and we had a little chat. I had heard before that his son was taking over the domaine and asked him about that. Assuming that Eric would retire, I was joking about what he would do once he stopped. But he will actually continue working in the vineyards. “No time to do other stuff”, he said. “The vineyards require constant attention.” His son Adrien is busy with the sales and he will focus more on foreign markets. And it’s then that I heard it : “This is the last time we are here.” I wasn’t sure I heard well, so I asked him again. “Yes, we don’t have time to do these wine fairs anymore.” My heart missed a beat. I was in shock. I wasn’t prepared for this. I wouldn’t be able to buy one of my favorite champagnes anymore. Well, technically, that’s not entirely correct. A Belgian wine shop actually started importing the champagnes of Dhondt-Grellet. And sells the Cuvée Prestige at almost double the price… Eric alluded to this : “Importers don’t like it that people can buy our champagnes here at much lower prices. And by the way, we get 2€ per bottle more when we export them.”

Well, what could I say?! These are very valid points. The demand for champage in the world is much higher than the supply, so they can basically sell whatever they make. And apparently also at whatever price they ask. Dhondt-Grellet started making a “cuvée parcellaire”, a champagne made exclusively from grapes from one vineyard. And they sell it at 70€. Next year that price will be even higher. “It’s sold before it’s put on the market.”

Knowing that this was probably the last time I would be able to buy their champagnes, I took a couple of boxes, assuring myself of a couple of good moments to come in the next few months. I felt somber when I shook Eric’s hand and wished him well. What would I do now? I could go to the Champagne region and buy my bottles locally, if I wanted to purchase at domaine prices. That’s still a 3 hour drive, however. But, hey, that’s not too bad. We’ll make a weekend out of it. And turn something bad into something good!

Still, I wandered on and went to another producer of champagne, Jean Gimonnet, trying to broaden my horizon now that I had lost my supplier of classy bubbles. One of the best champagnes I’ve had was from Pierre Gimonnet. It turned out that Pierre and Jean are cousins. I tasted four of their champagnes and was actually pretty impressed by their entry-level Brut Réserve. They are also based in the Côte des Blancs, so even if the Brut Réserve is a blend, it’s still 90% of chardonnay. Very classical champagne, with beautiful green apple and toast aromas, and a creamy mouthfeel. Just the way I like it! They also had two other champagnes that spent some time in wood barrels. One of them had very distinctive vanilla aromas, which was pleasant for a moment, but became too dominant just as quickly. But hey, what was there to complain. I felt pretty smug that I found a new dealer of bubbles. The prospect of going into champagne rehab was daunting. But now I felt like I was back into business. Whew!!