The Languedoc was known for a long time as the wine lake of France. The region was the main source of very simple wine, often Vin de France. Luckily, things have changed considerably. Winemakers have become aware of the fact that quality is important if they want to gain respect and sell their wines at a higher price. The evolution in the Languedoc to a tiered system with the AOC Languedoc as the basis, with communal AOCs in the middle and Crus at the top of the pyramid, is one of the things that shows how the region is focusing more and more on quality. Things are changing at a fast pace : Terrasses du Larzac was promoted to cru status in 2014, so was La Clape in 2015, and Pic St Loup was the latest to join in 2017. Earlier sub-regions to have become Languedoc crus were Roquebrun and Berlou (Saint-Chinian), La Livinière (Minervois) and Boutenac (Corbières). 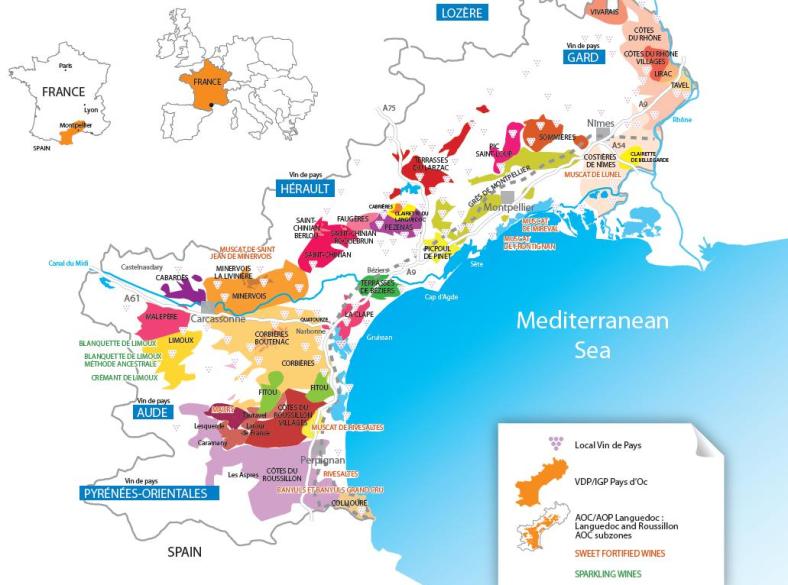 Corbières-Boutenac is a bit of a phenomenon, I find. Why? Because I can honestly say that I have never drunk a bad wine from Boutenac. If I say that Boutenac wines give great drinking pleasure, then I’m not doing justice to the winemakers. Because these wines are more than just pleasant quaffers. Boutenac wines are serious wines that combine luscious fruit, depth, length, and balance. On top of that, they are not the kind of wines that you need to store for 10+ years before you can enjoy them, quite the contrary actually. And you can still buy these wines at very reasonable prices. Not an unimportant factor if you know that the top wines of the Southern Rhone (Châteauneuf for example) will easily fetch prices above 100€…

I visited Château de Caraguilhes in 2014. This is a fairly big estate producing Corbières-Boutenac. I really liked their range of wines, from the entry-level “Classique” (AOC Corbières), which was very fresh and gave great drinking pleasure, until the top cuvée “Solus” (AOC Corbières-Boutenac).  I recently finished my last bottle of the Solus 2012, which was made of 40% carignan, 30% syrah, and 30% mourvèdre (note that there is no grenache here!). The nose was beautiful with loads of blueberry and blackcurrant. Ripe fruit but not overripe. Also a bit of liquorice. This wine is very balanced, with good supporting acidity, and ripe, velvety tannins in the end. I find this a beautiful example of how a wine from the South of France can be ripe, powerful and well balanced at the same time.

And that is exactly what I liked in many of the Boutenacs I tried so far. They do not fall in the pitfalls that some Languedoc wines do fall in : too much alcohol, overripe fruit, and the kind of garrigue spiciness that makes you think you actually have a garrigue bush in your glass. I do like a bit of it, but in some Languedoc wines it can be very dominant.

Now, why is it that Boutenac wines distinguish themselves in such a way? Well, I could make my life easy and say it’s terroir… And, of course, terroir does play a role. The vineyards are situated on the slopes around the Massif du Pinada, where the nights are cooler than in the valley. There is also a strong wind that gives a cooling effect (depending on where these winds come from, they actually have names!). And the soil is mainly composed of galets roulés, the round stones that you also find in the Rhône and that allow the vines to root deeply, arming them better against water stress.

But there’s more to it than that. Let’s have a look at the grape varieties that are allowed in Boutenac. Nothing unusual at first sight : grenache, mourvèdre, carignan and syrah. But it’s interesting to see that the proportion of carignan has to be between 30% and 50%. Wait a moment… Isn’t carignan the grape variety that was pulled out in the 1990s? It is. The total area planted with carignan is said to have halved in those days. Carignan gave unbelievably high yields of 200hl/ha (!) and was used to produce cheap Vin de France. No wonder carignan was the first victim when the EU subsidised the local farmers to pull their vines.

And still, carignan can be interesting! On condition that the yield is kept low, and that the grapes come from old vines , the so-called vieilles vignes. In Boutenac the maximum yield is 45hl/ha, that’s more than five times lower than wat carignan is capable of producing, and the minimum age of the vines needs to be 9 years. When those things are under control, carignan can add structure and freshness to the blend. Well, there we go… Full circle! I actually got a chance to test this and be sure that I don’t peddle nonsense as I recently came across a 100% carignan in a local wine shop.  It was the cuvée Les Anciens 2014 of Château Maris, also a cru actually, but La Livinière, which is the cru of Minervois. The wine was relatively transparent for a Languedoc and had aroma’s of fresh red fruit, fresh cherries, not jammy at all. Good acidity and the tannins were noticeable, but ripe. It’s rare to find 100% carignan, and I was very happy to taste it, because it perfectly confirmed my story here : when carignan is made with care and know-how, you can make good stuff with it. And it’s a perfect blending partner to give freshness and structure.

So if you come across wines of Corbières-Boutenac, give them a try! I can definitely recommend Château de Caraguilhes, and not only for the Solus. Their whole range of wines deserves your attention.

Here’s a few other producers of good Boutenac whom I can wholeheartedly recommend :

Château Ollieu Romanis : owned by Pierre Boriès, the former president of the appellation Boutenac. Their Cuvée Or is a very rich, luscious Boutenac. Excellent!

Château Maylandie : their Villa Ferrae is one of my favorite Boutenacs. Again I like the balance here, and the combination of ripe red fruit with black chocolate.

Today’s post is a joint venture with the French #Winophiles, a group of bloggers who blog every month on a different theme related to French wines. Be sure to have a look at their stories on the Languedoc :

Gwen from Wine Predator > Grilled Cheese with 4 Affordable Wines from Occitanie: new name for a fave region in France

Melanie from Wining with Mel > French kiss: a glimpse into the food and wine of Languedoc

Jill from L’occasion > New Roots Along the Canal du Midi

If you’re on Twitter, you can also join the live Twitter chat on Saturday 21 October at 10am CDT, that’s 5pm in Belgium. Unfortunately I cannot make it myself for the live chat but if you want to join, simply log into Twitter and search for the #winophiles tag!

13 thoughts on “Boutenac : balance in the Languedoc”